For the past ten days I have been in Argentina and Uruguay working with Incubators and start-ups bursting forth on the South American Economy. 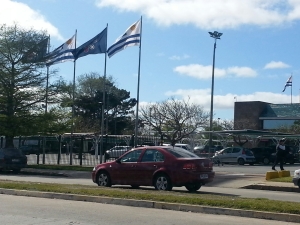 My job? Inspire and imprint Creating Thinking, Enterprise Culture and Communication skills to the three sectors that really matter… folks running Incubators, the start-ups themselves the Investors – oh and the educators – although they perhaps don’t make my list of three!?!

All run by the national agency for  investigation and innovation…ANII (amazing, lovely people!)

The majority of my time was spent in Uruguay – Montevideo. Very generous and how can I put it – semi-dynamic people…by this I mean kind, friendly and still working on conquering the world – mind-sets are still verging on inferiority a tiny country wedged between the powerhouses of Brazil and Argentina .

But hey Uruguay (as we were reminded..) have won the world cup TWICE – a country the size of wales – and how many times have Wales won the world Cup?

So despite the inferiority on the surface the Uruguayans have a deep-rooted sense of … we can infact conquer the world.!

This was a trade mission to inspire and support Enterprise activity.

Uruguay is going places – no doubt

They also love their unique wine – the grape is Tannat – https://en.wikipedia.org/wiki/Tannat

Yes cows – every meal – every conversation…

did you know there are three cows per person IN Uruguay and 10 million sheep(s)!”

Did you know there are five cows per person in Uruguay? And 20 million sheep(s) ..

In my workshops, in our visits to incubators, Co-working spaces, government agencies, to theatres, restaurants and bars it was clear that pride is pumping, the economy is good, the cows are grazing, the people lovely  and that Uruguay is on the map – even if it is a speck of a country wedged between two giants…