This is my new TEDx talk : How to be lucky… focusing on Serendipity: where good fortune meets the prepared mind…

I tried to simplify networking and relationship building; to think about striving for clear simple, fast and brave decision making.

Where possible we should empower our gut feelings and take ownership for decisive decision-making. This includes encouraging our bravery, creativity and imagination as well as thinking through the risks.

In this complex world we have to unlock innate creativity and orientation to risk as a way of questioning this world and being part of the story, but not being purely at the mercy of economic or social dynamics.

We have to encourage ourselves to be strategic decision makers of course, but also to embrace flexibility, fast thinking and individualism.

We need to encourage a  “Heads-up, Hearts in Culture” where we and those around us,  are individuals with a growth mind-set, yet still involved in securing the success of ‘the team’ .

Surviving is about how people can work together strategically towards a common goal . Thriving is encouraging risk and gut decision-making without losing sight of the Survival part!

Make bold decisions … be ready, be responsive… be lucky! 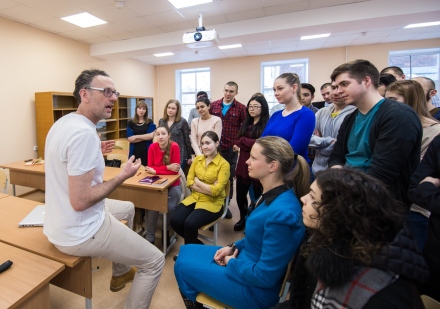 Two events in St Petersburg this week really got me thinking about how we tell our stories – or rather – how we engage.

My ‘main job’ as a theatre director is in many ways about creating and telling stories. Not stories that are necessarily fairy tales or epic adventures.. but rather experiences and performances that create vivid images and use powerful text to challenge thinking whilst exciting and provoking the audience.

The Theatre Director and writer Tim Etchells (Forced Entertainment UK) wrote a ‘play’  for us (Menagerie) once way back (in 2002?), it wasn’t a typical three act drama with a prologue followed by some conflict and nice resolution – it was a series of challenges to “form and thought” .The presentation was  three actors speaking statements that were or were not funny. The decision of the level of humour is of course in the control of each audience member.

“ A Painter that is allergic to Paint”

Is that funny or not funny? The list builds…

“A boy writing his name in pee in the snow”

“A girl writing her name in pee in the snow”

“Tying your shoelaces whilst drunk”

“Cancer of the throat”

A world emerges of cruelty, love, anger and beauty, the audience’s reactions build the stories. Each experience is pondered, contextualised (“well it would be funny if I was 15 and had been drinking beer “). What Tim  did was create non-linear stories by building up a jigsaw or mosaic of experiences that frustrated, touched , endeared  or angered the audience.

What were their reactions based on? On their mood? Their age? Background? Cultural reference points? As the list grew so did our (the audience’s) capacity to think, to absorb and to imagine… What if…

What was great about Tim’s piece (called MFI by the way) was that it had a universality. A hypnotic quality. Although the three actors who recited each statement appeared to be randomly selecting their comments, we started to build up a picture of each of them according to what they found funny about their own comments and about each other’s.

And isn’t that the point? Create something that people can react to, that they can visualise, personalise– feel  something about. Of course for many this isn’t storytelling – its “Performance Art”

Yes this piece was challenging, but it was also mesmerizing and human. Too often we hear the same things over and over again. In business, as in art we should look to create a reaction – a response to what we think, feel and say.

For the Creative Agency BC Communications my “lists or statements” were transposed into  Challenges  or games – for each member of staff to respond to – to really think about their own story – what makes them laugh? Scared? To want to take a risk? To want to focus on? Each exercise was its only little “statement” – how do you feel ? – is this Funny? Is this thought-provoking?

At ITMO University I challenged business students to think about their framing of stories in terms of how they and others see the world. The simplest framing  being The World as it Was, as it Is and as it Can Be… the statements are built – challenges set.

Is it funny?, that doesn’t matter – is it going to get a reaction? THAT matters, because then someone cares about what you’re saying…

Below is a description of Tim’s work …

Across the range of my work I use strong, simple, sometimes comical means to get to serious ideas.

My practice shifts from performance to visual art and fiction and concerns itself with questions of contemporary identity and urban experience, our relation to fiction and the media, as well as with the limits of representation, especially in respect of language.  Working across different media and contexts opens up new possibilities and allows me to approach the ideas that interest me by different routes, shifting my perspective on the themes and experiences I want to investigate.

I have created a body of work exploring contradictory aspects of language in playful and poetic ways. I’m drawn both to the speed, clarity and vividness with which language communicates narrative, image and ideas, and at the same time to its amazing propensity to create a rich field of uncertainty and ambiguity.

Infiltrating galleries, street corners, shop windows, rooftops and other locations the neon sign and LED works I have made spell out simple-but-intriguing phrases, messages and instructions. Appearing to address the viewer directly through these works, I’m interested to create moments of thoughtfulness and playful encounter in a public setting;  the work is public but private at the same time, trying to draw each person that encounters it into a space of intimate reflection.