I have been on my travels again for meetings and talks in Prague, with people working with Impact Hub. This is a space where business Start-ups engage in work-space, events, talks and networking.

These projects are all about networking, about strength in collaboration. Every project I have ever worked on has been one that has come about because of planning and vision combined with luck and networking – all based around inspiring and being inspired by people.

I stand by the Aristotle quote about getting involved, engaging and taking risks … if you want to avoid criticism then …

But if you want to engage with people, take risks create sparks and opportunities then;

This philosophy and some tools for achieving it is what I have been touring Europe and speaking about and engaging with.

Sandwiched in between these, back in Cambridge we have been working on developing our new touring production of the play bloominauschwitz;

In between Prague and Amsterdam trips I have been in Slovakia working with my colleagues at Kosice 2013 http://www.kosice2013.sk/en/

The highlight of the first part of the trip to Slovakia was a trip to The Matrioshka Festival http://www.matrioshka.sk/festival-2/

This is a retro Communism festival – very interesting idea to look at the art and culture that was associated with Communism and especially in the context of the Czech Republic.

The description of the group organising it is

We are AZIMUT, a civic association, which aim is to break the barrier of secrecy and indifference; and thus renew the debate about totalitarian regimes and dictatorships. We feel that in a society, the downplaying of these topics is happening more and more; people are passive and indifferent and even become tolerant to the their spread. We are supporting all people, who are intelligent, freethinker, free-creators, free-speakers and free silent. Through Matrioshka festival, we want by art form arouse interest in young people for greater awareness of democratic values and freedoms, that are today freely available to all of us. At least for now. So don’t mess it up people.

So in true Communistic style we go marching through the streets of Kosice singing Communist songs and hearing a broadcast of Communist speeches and archive materials. There is great irony and confusion on the streets as music and speeches blast from speakers and it turns dark as we hear gunfire and screams before bringing the Absurdity to and end.

Under the banner of Don’t Let Absurdity Destroy Humanity the festival was celebrating Communism in one sense – reflecting on the activities in Arts and Culture associated with it, but more importantly celebrating the fall of Communism and the energy and opportunity that freedom brought with it.

Plays, talks, films and exhibitions follow.. All of this is the brain-child of students of the Escalator Programme which I was a part of teaching ; Mirka and Slavo –

To be honest I love a good march and being told what to do ! But it was also very sobering to hear the stories and reflect on the restrictions… the feeling is that issues in Ukraine are building pressure again..

The young people of Kosice have been using their energy to at least focus on the Absurdity of the world as was, without gilding the world we live in now…an interesting, sobering and valuable festival which we will see again in 2015… 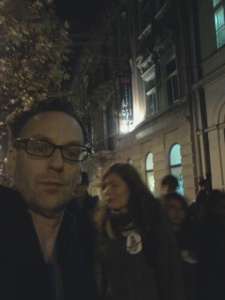